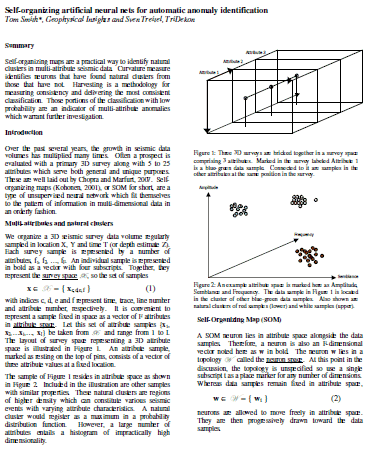 Self-organizing maps are a practical way to identify natural clusters in multi-attribute seismic data. Curvature measure identifies neurons that have found natural clusters from those that have not. Harvesting is a methodology for measuring consistency and delivering the most consistent classification. Those portions of the classification with low probability are an indicator of multi-attribute anomalies which warrant further investigation.

Over the past several years, the growth in seismic data volumes has multiplied many times. Often a prospect is evaluated with a primary 3D survey along with 5 to 25 attributes which serve both general and unique purposes. These are well laid out by Chopra and Marfurt, 2007. Self-organizing maps (Kohonen, 2001), or SOM for short, are a type of unsupervised neural network which fit themselves to the pattern of information in multi-dimensional data in an orderly fashion.

We organize a 3D seismic survey data volume regularly sampled in location X, Y and time T (or depth estimate Z). Each survey sample is represented by a number of attributes, f1, f2, …, fF. An individual sample is represented in bold as a vector with four subscripts. Together, they represent the survey space k , so the set of samples 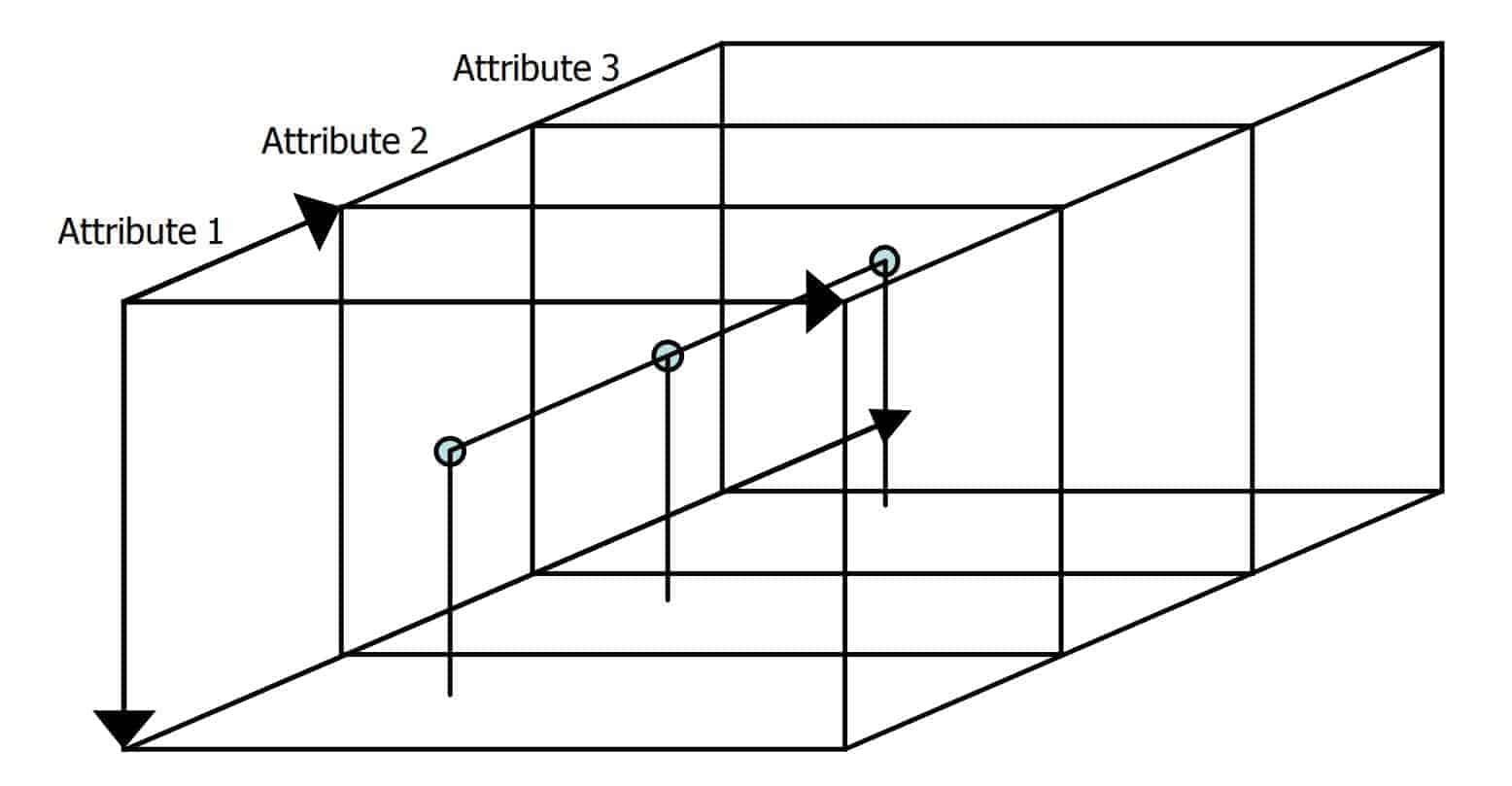 Figure 1: Three 3D surveys are bricked together in a survey space comprising 3 attributes. Marked in the survey labeled Attribute 1 is a blue-green data sample. Connected to it are samples in the other attributes at the same position in the survey. 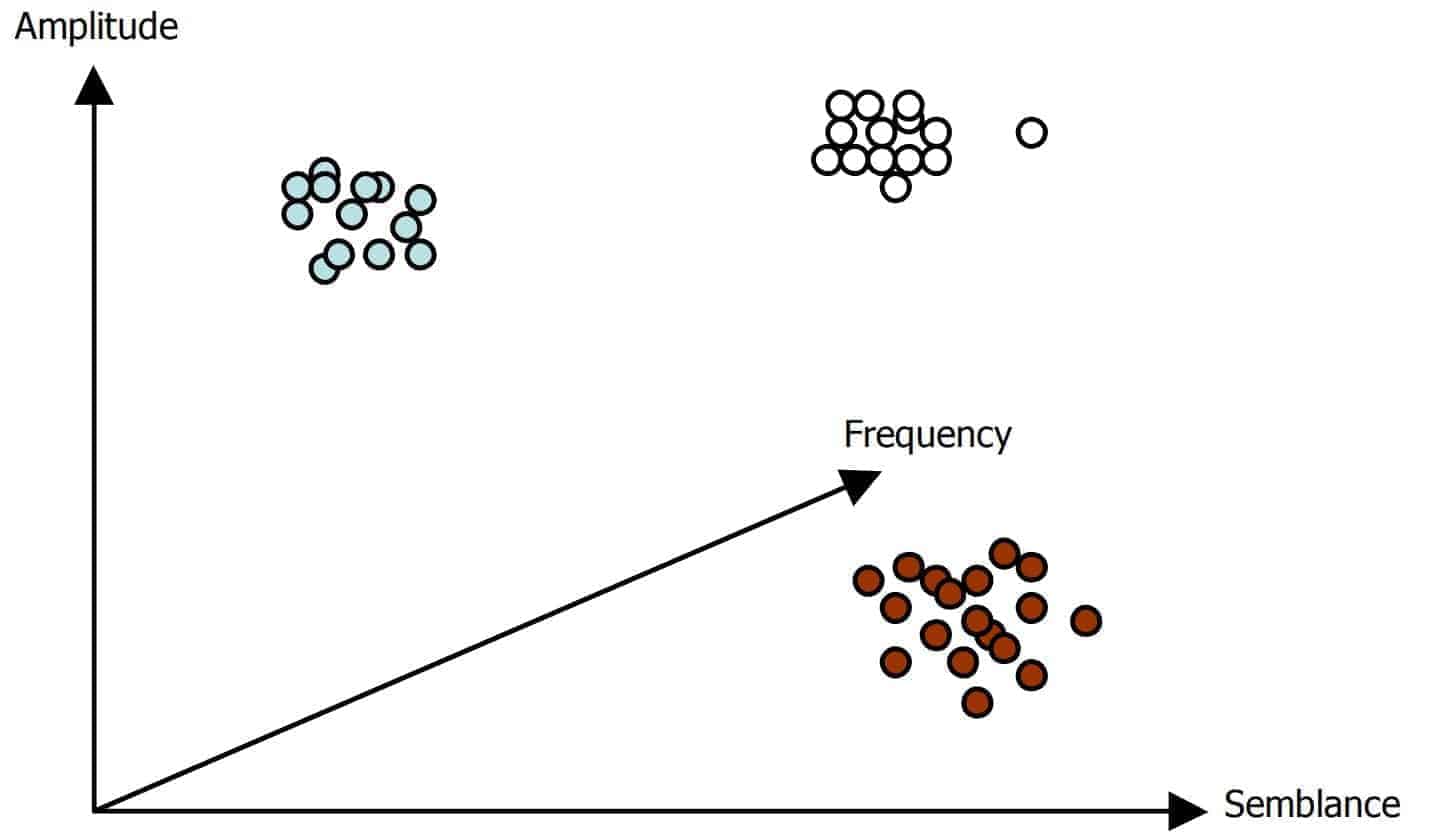 Figure 2: An example attribute space is marked here as Amplitude, Semblance and Frequency. The data sample in Figure 1 is located in the cluster of other blue-green data samples. Also shown are natural clusters of red samples (lower) and white samples (upper).

The sample of Figure 1 resides in attribute space as shown in Figure 2. Included in the illustration are other samples with similar properties. These natural clusters are regions of higher density which can constitute various seismic events with varying attribute characteristics. A natural cluster would register as a maximum in a probability distribution function. However, a large number of attributes entails a histogram of impractically high dimensionality.

A SOM neuron lies in attribute space alongside the data samples. Therefore, a neuron is also an F-dimensional vector noted here as w in bold. The neuron w lies in a topology j called the neuron space. At this point in the discussion, the topology is unspecified so use a single subscript t as a place marker for any number of dimensions. Whereas data samples remain fixed in attribute space,

neurons are allowed to move freely in attribute space. They are then progressively drawn toward the data samples.

A neuron “learns” by adjusting its position within the attribute space as it is drawn toward nearby data points. Then let us define a self-organizing neural network as a collection of neurons {w1, w2,…, wi,…, wJ} with an index ranging from 1 through J. The neural network learns as its neurons adjust to natural clusters in attribute space. In general the problem is to discover and identify an unknown number of natural clusters distributed in attribute space, given the following information: I data samples in survey space; F attributes in attribute space; and J neurons in neuron space. The SOM was invented by T. Kohonen and discussed in Kohonen, T., 2001. It addresses such issues as a classic problem in statistical classification. 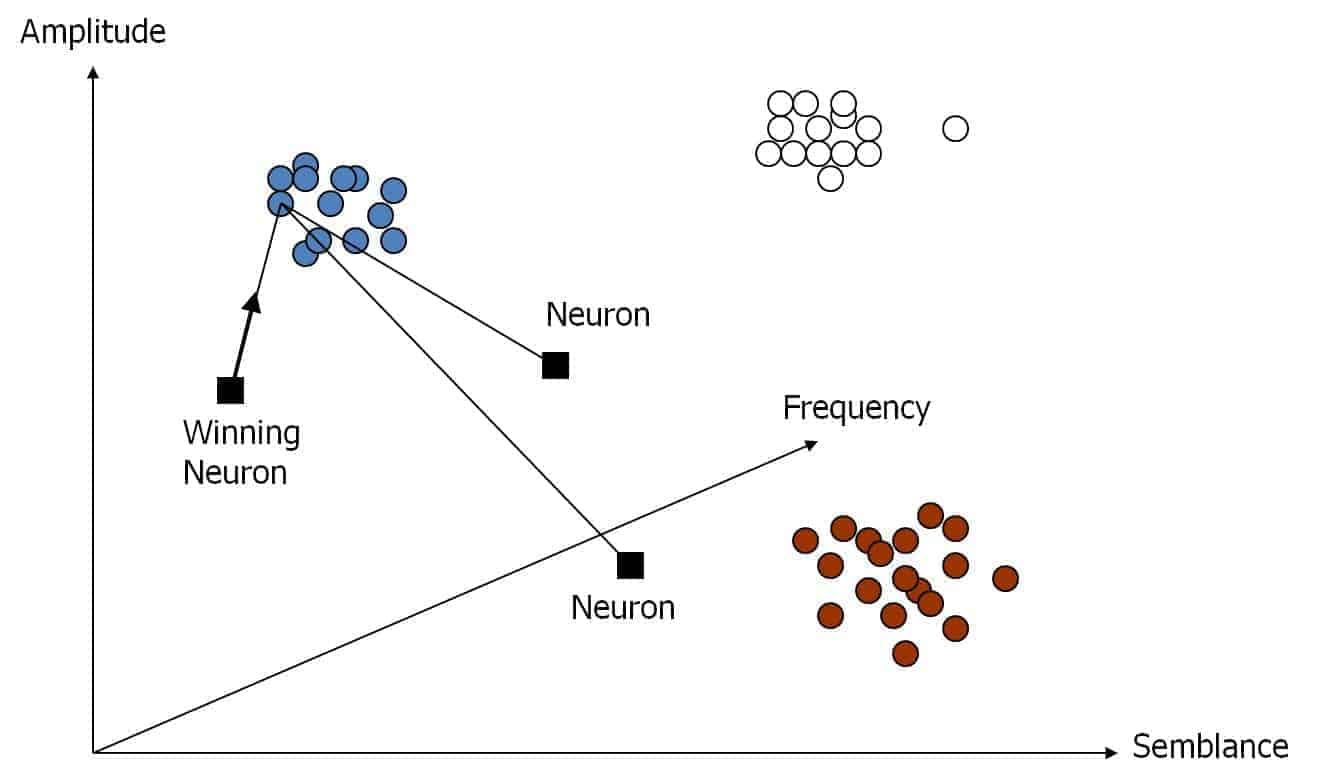 p class=”wp-caption-text”>Figure 3:The winning neuron is the one which is closest to the selected data point.

In Figure 3 we place three neurons at arbitrary locations in attribute space from Figure 2. A simple process of learning proceeds as follows. Given the first sample, one computes the distance from the data sample to each of the 3 neurons and selects the closest one. We choose the Euclidean distance as our measure of distance.

The winning neuron with subscript k is defined

The process just described is the basis of the SOM. A SOM neuron adjusts itself by the following recursion.

where wj(n) is the attribute position of neuron j at time step n and k is the winning neuron number. The recursion proceeds from time step n to step n + 1. The update is in the direction toward x along the “error” direction x–wj(n). The amount of displacement is controlled by the learning control parameters, η and h, which are both scalars.

The h term embodies still another type of learning and which is also part of the SOM learning process. 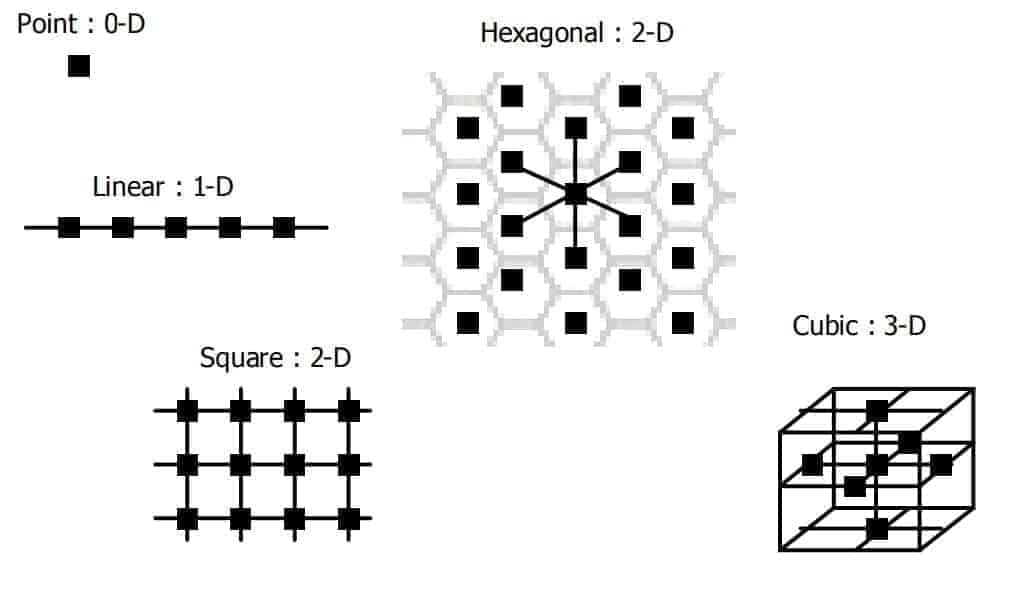 Figure 4:An assortment of neuron network topologies is shown here. Let the neuron position be r(p) with the distance between a neuron and its nearest neighbor set to 1 unit.

In the hexagonal topology of Figure 4, note that the marked neuron has 6 nearest neighbors. If this neuron is selected as a winning neuron, equations (6) and (7) indicate that the 6 nearest neurons move toward the data sample by a like amount. More distant neurons from the winning neuron move a lesser amount.

To search for natural clusters and to avoid the curse of dimensionality (Bishop, 2007), we allow the SOM to find them for us. However, there is no assurance that at the end of such a SOM analysis the neurons have come to rest at or near the centers of natural clusters. To address this issue, we turn to the simple definition of a maximum. A natural cluster is by definition a denser region of attribute space. It is identified as a maximum in a probability distribution function through analysis of a histogram. In 1D the histogram has a maximum; in 2D the histogram is a maximum in 2 orthogonal directions and so on.

In F-dimensional attribute space, a natural cluster is revealed by a peak in the probability distribution function of all F attributes. Recall that at the end of an epoch there is a one-to-one relationship between a data sample and its winning neuron. That implies that to every winning neuron there corresponds a set of one or more data samples.

Then for some winning neuron with index k, there exists a set of data samples x for which

and where k N include the samples drawn from k for that winning neuron. Some winning neurons in equation (9) have a small collection of x samples while others will have a larger collection.

In the set x for a winning neuron wk, for each of the f attributes [1 to F] we can determine a histogram. If there is a peak in the histogram we have found a higher magnitude in the probability distribution in that particular dimension and so score this attribute as a success. We count all attributes in this way (1 for success or 0 for failure) and divide the result by the number of attributes. Curvature measures density and lies in the range [0,1]. Each neuron and each attribute has a curvature measure.

A harvesting process consists of three steps. First, unsupervised neural network analyses are run on independent sets of data that have been drawn from a 2D or

We have conducted a series of SOM analysis and classification steps for the Stratton Field 3D Seismic Survey (provided to us by courtesy of the Bureau of Economic Geology and the University of Texas). A time window of 1.2 to 1.8s was selected for SOM analysis with an 8 x 8 hexagonal network and 100 learning epochs. We measured performance by standard deviation of error between data samples and their winning neurons. Standard deviation error reduction was typically 35%. A separate SOM analysis was conducted on each of the 100 lines in order to assess consistency of results. The SOM results were highly consistent with a variation of final standard deviation of error of only 1.5% of the mean. The rule used here is to select the SOM solution for the line which best fits its data through smallest error of fit. 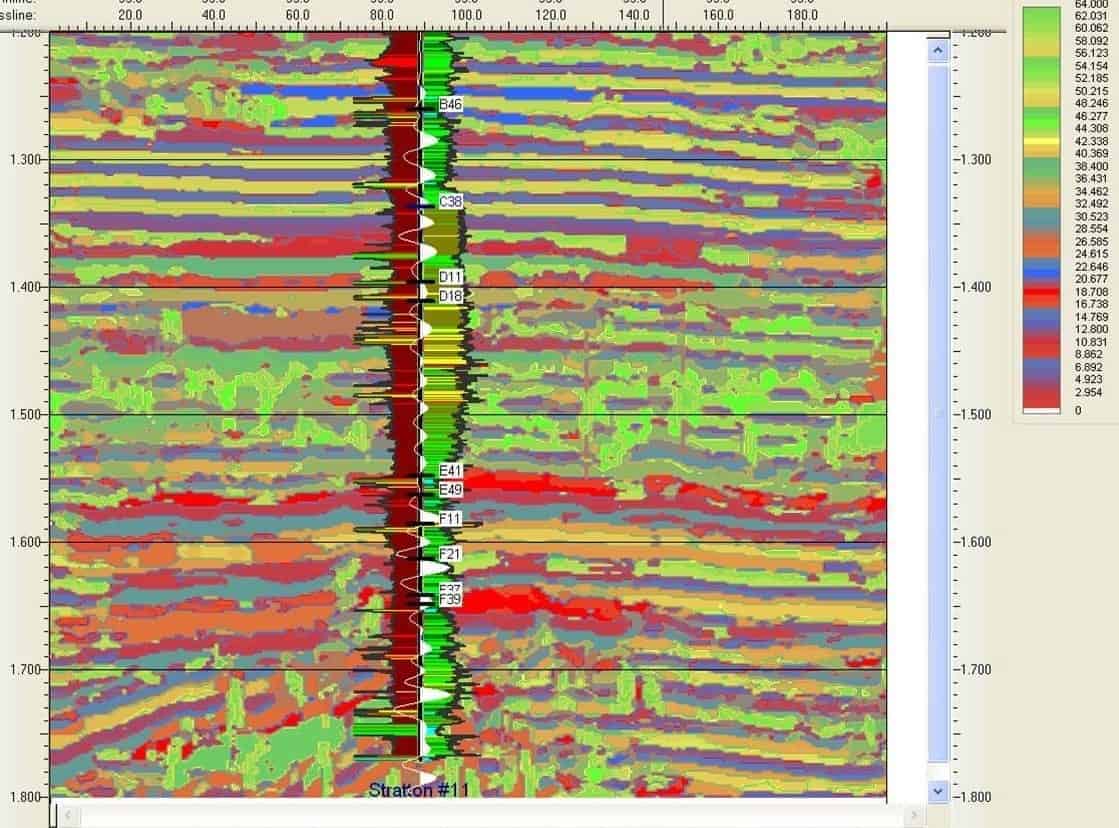 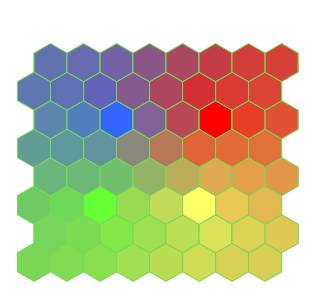 The SOM results form a new attribute volume of winning neuron classifications. Every sample in this new volume is the index of the winning neuron number for a given data sample. The SOM analysis was derived from 50 attributes which included basic trace attributes, geometric attributes and spectral decompositions. A solution line is shown in Figure 5.

First observe that the SOM results more or less track geology as shown by flat reflections near 1.3s. At the well are shown SP and GR well log curves with lithologic shading, formation top picks as well as a synthetic seismogram (white WTVA trace along the borehole). A second reflector above 1.6s is a second key marker. Also notice the green patches near 1.5s. These were identified as patches with lateral consistency. We have no geologic interpretation at this time. In Figure 6 we show the colorbar patterned to the neuron topology and colored to assist in identification of regions of neuron clusters. 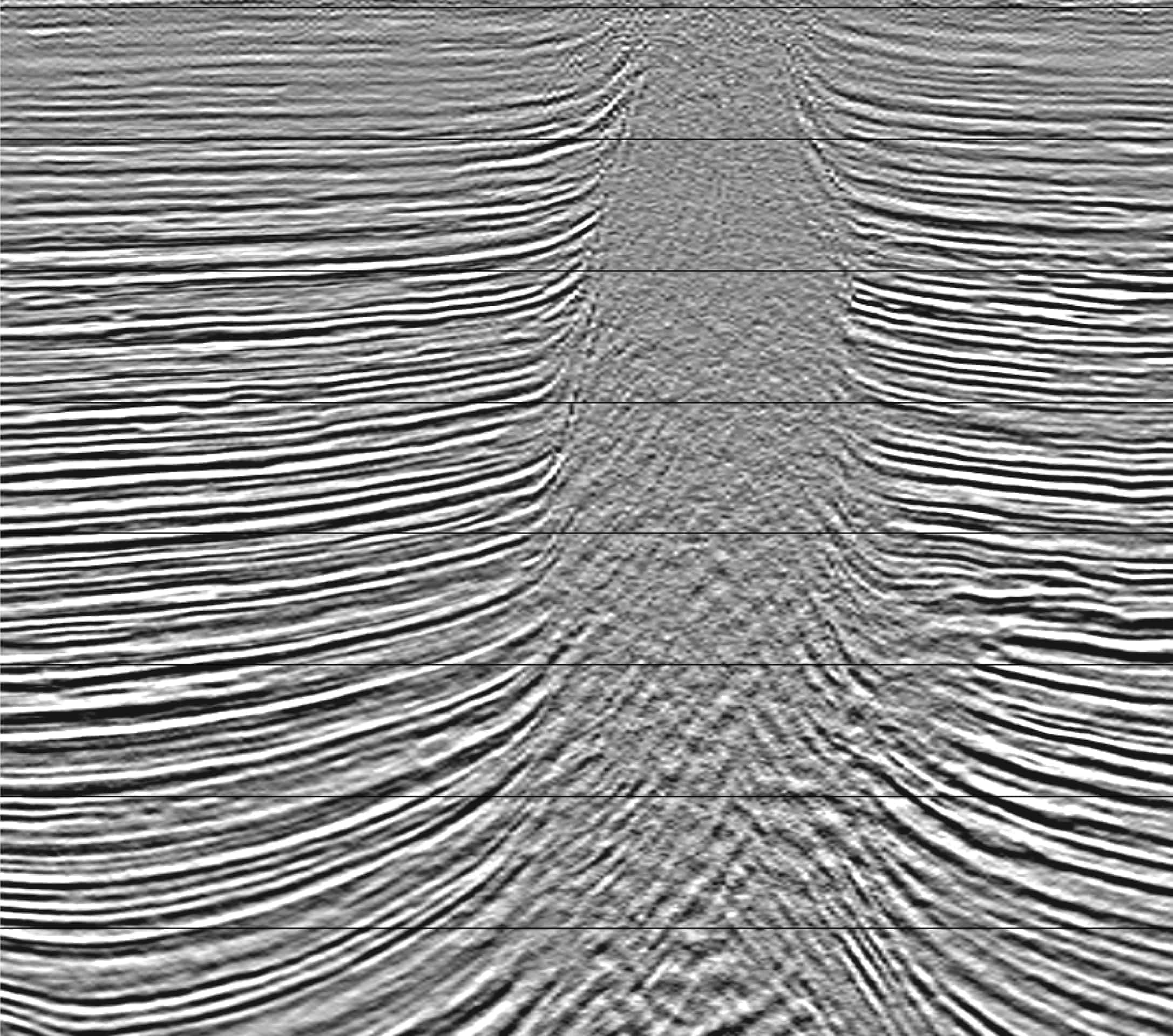 Figure 7:Vertical section through a 3D survey of a Gulf of Mexico
salt dome. 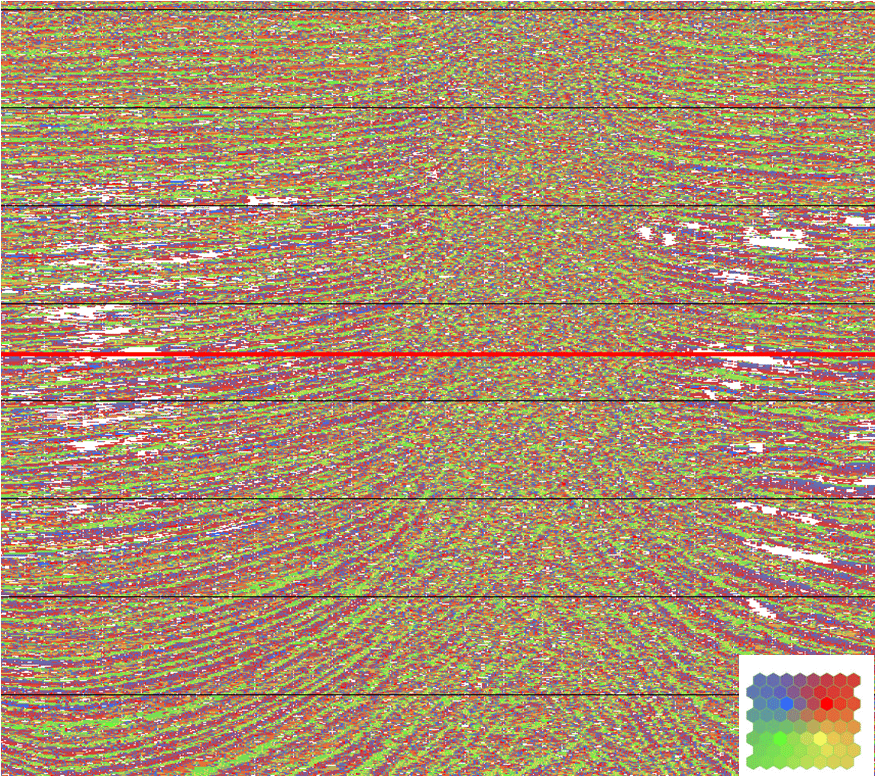 Figure 8: SOM classification with p > .1 corresponding to the same
slice as Figure 7. 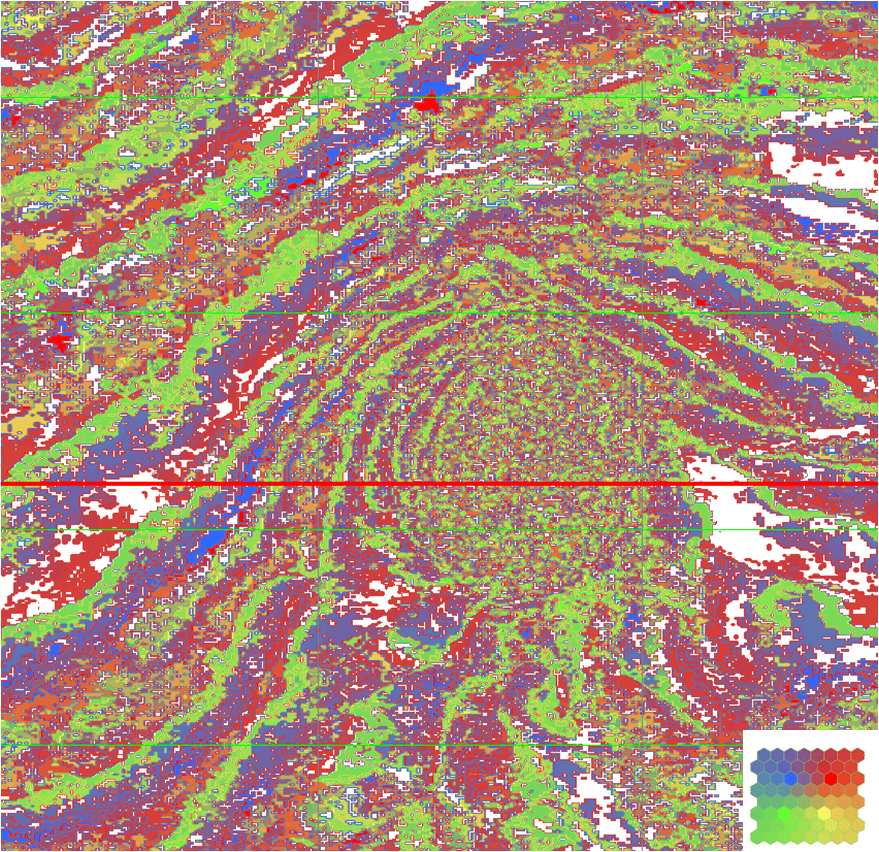 Curvature measure (CM) of the neurons fell in the range .72 to .9 except for one neuron which had a curvature measure of .26. It was found that this winning neuron resulted from only 8 samples while others had 17 to 139.

Equation 9 is the basis on which we classify the quality of classification samples. For any winning neuron, we select samples with probability p which exceed threshold pmin

based on the distance between the winning neuron and its samples, shown here as equation 10. Those samples that are near their winning neuron have higher probability.
From Figure 7, the classification of Figure 8 results from a SOM analysis with an 8 x 8 neuron network, designed on the basis of F=13 attributes and 100 epochs. Those samples whose probabilities lie below pmin are anomalous and assigned a white color. The rest of the classification uses the colorbar of Figure 6.

The red lines of Figures 8 and 9 register their views so the white area anomaly on the right side of the salt in Figure 8 has an areal extent that appears to be bounded by the salt in Figure 9. We are not suggesting that all anomalies are of geologic interest. However, those of sufficient size are worthy of investigation for geologic merit.

This presentation investigates the areas within a 3D survey where multiple attributes are of unusual character. Self-organizing maps assist with an automatic identification process. While these results are encouraging, it is readily apparent that additional investigations must be made into appropriate learning controls. Various structural and stratigraphic questions which might be posed to SOM analysis will require careful selection of appropriate attributes. It is also clear that calibration of SOM analyses with borehole information offers an attractive area of investigation.

Tury Taner was our inspiration and pioneer in this area.