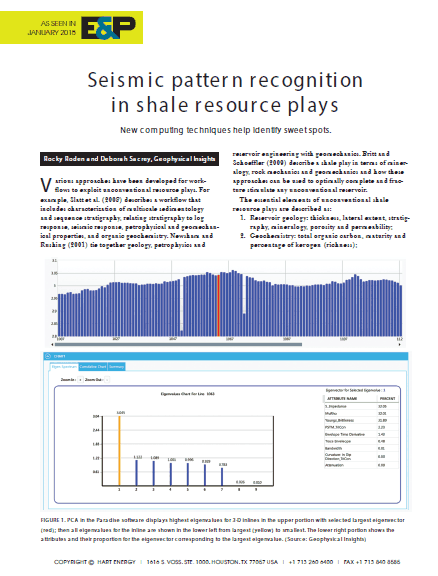 The application of PCA can help interpreters identify seismic attributes that show the most variance in the data for a given geologic setting and help determine which attributes to use in a multiattribute analysis using SOMs. Applying current computing technology, visualization techniques and understanding of appropriate parameters for PCA and SOM enables interpreters to take multiple seismic attributes and identify the natural organizational patterns in the data.

Various approaches have been developed for workflows to exploit unconventional resource plays. For example, Slatt et al. (2008) describe a workflow that includes characterization of multiscale sedimentology and sequence stratigraphy, relating stratigraphy to log response, seismic response, petrophysical and geomechanical properties, and organic geochemistry. Newsham and Rushing (2001) tie together geology, petrophysics and reservoir engineering with geomechanics. Britt and Schoeffler (2009) describe a shale play in terms of mineralogy, rock mechanics and geomechanics and how these approaches can be used to optimally complete and fracture stimulate any unconventional reservoir.

The essential elements of unconventional shale resource plays are described as:

There is, of course, overlap in these various categories, and how these various elements are interrelated also depends on the objective, which might be to define sweet spots to drill, optimize drilling locations, define completion operations or even determine economic viability. 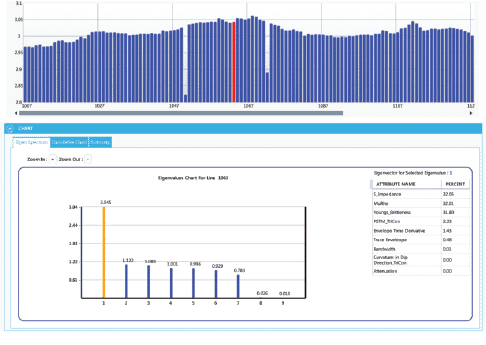 In shale resource plays, conventional seismic data are one of the few tools geoscientists have at their disposal to interpret regional trends and guide locations and orientation of infill wells. In shale resource plays the interpretation of seismic data can be quite challenging because of resolution issues and anisotropy, and even though shales make up 70% of sediments, knowledge of shales as reservoirs is limited. Seismic attributes are often generated to help interpret the seismic properties of shale resource plays, which, of course, are a valuable guide to understanding the geology. Seismic attributes such as amplitude, dip, frequency, phase and polarity are measurable properties of seismic data. Attributes can be measured at one instant in time/depth or over a time/depth window and may be measured on a single trace, on a set of traces or on a surface interpreted from seismic data. Seismic attributes reveal features, relationships and patterns in the seismic data that otherwise might not be noticed (Chopra and Marfurt, 2007). 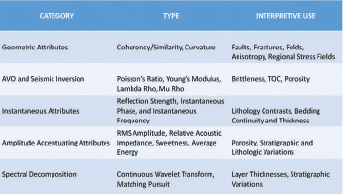 TABLE 1. These are typical seismic attribute categories and types employed in shale resource
plays and their associated interpretive uses. 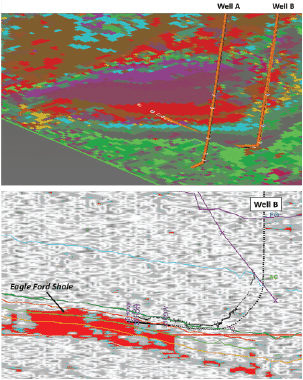 The selected eigenvalue (in red) on the top of Figure 1 is expanded by showing all eigenvalues (largest to smallest left to right) on the lower leftmost portion of the figure. Seismic attributes for the largest eigenvector show their contribution to the largest variance in the data. In this example S impedance, MuRho and Young’s brittleness make up more than 95% of the highest eigenvalue. This suggests that these three attributes show significant variance in the overall set of nine attributes employed in this PCA analysis and may be important attributes to employ in a SOM analysis. Several highest ranking attributes of the highest and perhaps the second-highest eigenvalues are evaluated to determine the consistency in the seismic attributes contributing to the PCA. This process enables the interpreter to determine appropriate seismic attributes for the SOM evaluation.

Once a set or perhaps several sets of seismic attributes are selected, these sets of seismic attributes are input into separate SOM analyses. The SOM setup allows the interpreter to select the number of clusters, window size and various training parameters for a SOM evaluation. Figure 2 displays the classification results from an evaluation of the Eagle Ford Shale. The seismic attributes employed in the SOM analysis are a combination of attributes from prestack simultaneous inversion, instantaneous attributes and a curvature attribute. The westernmost well A had few shows and no production in the Eagle Ford interval. Well B to the east was drilled into a cluster identified from the SOM analysis as the region in red. This well encountered good shows in the Eagle Ford. The vertical seismic display through Well B in Figure 2 shows how the well encountered good shows as it entered into the Eagle Ford interval. Therefore, the cluster associated with the red areas in Figure 2 is defining apparent sweet spots or optimal productive zones in the Eagle Ford.