Every day, 2.5 quintillion bytes of data get created and in the last two years, 90% of the world’s data was generated. So much information is available to us and permeates every single area of our life. Our work heavily relies on finding insights from the deluge of overwhelm. As humans, we face a severe challenge. Every problem we face, we bring cognitive and experiential biases to the problem and hence never see the solution in front of our own eyes. For example, let’s look at the following problem.

A truck is stuck having driven under an overpass which was, unfortunately, lower than the height of the truck by an inch. The driver has wedged the truck in pretty bad and cannot either reverse out or go forward. It’s caused a major traffic jam, and other cars have stopped to assess the situation. After thirty to forty-five minutes discussing how to get the truck out, a boy aged six speaks up and solves the problem. What was it that he said?

Einstein stated eloquently, “We can’t solve problems by using the same kind of thinking we used when we created them.” Unlike us, machines don’t have cognitive biases and “experience baggage” when reading through data. They make their assessments based on pattern recognition and algorithms. Machine Learning can find things we may not be privy to, having the ability to parse and interpret massive amounts of data and identify patterns for us. What we may glance over, due to our experiences, biases, they will highlight for us.

Our inherent need to add meaning to the problem is also our biggest strength. We need to take the patterns recognized and determine their meaning. Machine Learning will never replace the need for a data interpreter.  Machine Learning will never replace humans, regardless of how impressive the algorithm. We will always need to make meaning of the patterns that are recognized.

We also need to evolve our thinking as we leverage Big Data and Machine Learning. The problem we just went through was an example of lateral thinking. Edward DeBono coined the phrase in 1967. Simply put, as Einstein stated, we need to be able to interpret the problem we have or the patterns that are recognized with a different mindset that allows us to detach from the cognitive and experiential biases we may imply to the problem. Then state the facts and play a game of “What if.”

As we look back to the problem of the truck, we should see what our cognitive biases, assumptions, and prior experiences are. Write down those and then state the facts of the problem. The small boy noticed that height of the truck was the issue whereas all the older folks thought that perhaps the driver could slowly shimmy the truck to safety. One suggested placing butter on top of the truck as if a semi-truck was equivalent to a wedding ring. The boy thought, how do you lower the height of the truck and eventually said: “Well if you deflate the air out of the tires then the truck will be lowered.” 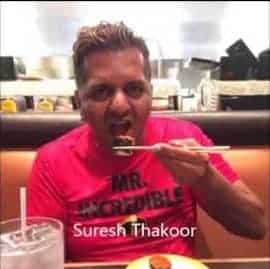 Suresh Thakoor is a Senior Software Developer with Geophysical Insights where he works on the user interface for Paradise, the multi-attribute analysis software. He has a Masters of Science in Software Engineering from the University of Liverpool, a Bachelors of Arts in Economics from Virginia Tech and has worked in software development for 17 years. He is an avid writer, artist, musician but his favorite title is being a dad. He is fascinated by machine learning, astronomy, game theory, and quantum physics.