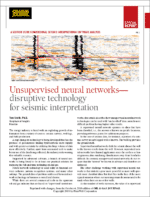 The energy industry is faced with an exploding growth of information from a variety of sources –  seismic surveys, well logs, and field production.  A step-change in technology is being developed that has the promise of geoscientists finding hydrocarbons more rapidly and with greater certainty by utilizing this large volume of data more effectively.  Further, apart from automated tools to make better use of the data being collected, the industry risks wasting this valuable resource.  Supported by advanced software, a branch of neural networks is being found to be at least one practical solution for reducing the risk and time in finding oil and gas.  Neural network technology is used today in financial services software, pattern recognition systems, and many other settings. The general class of problems addressed by neural network technology in business is varied and diverse.  While there are several commercial tools in the upstream oil & gas industry which are based on “supervised” neural networks, this paper describes how unsupervised neural network technologies can be used with “unclassified” data, a much more difficult problem having higher value results.

The other challenge working with supervised neural networks is that statistics grow more powerful as more wells provide more classified data.  But that flies in the face of the more typical situation where our most important decisions need to be made when there are no or few wells.

The balance of this paper describes how unsupervised neural network technology can be used to identify seismic anomalies through the use of multiple seismic attributes and how these anomalies may reveal the presence of hydrocarbons, often when conventional methods fall short.  The new technology may also find application in prediction of lithologies and fluid properties; perform a comparative analysis of wells, and select the best seismic attributes for interpretation.  In seismic interpretation, unsupervised neural networks can be used to reveal subtle geologic features that may have been missed by conventional analytic methods. Through the balance of the paper, the term “neural network” will refer to only the unsupervised form of the technology.

Four wells have been drilled since 2006 in the “study area” of northern Wharton County, Texas.  Using a popular industry suite of seismic interpretation software, the company interpreted several locations to be lower risk gas prospects.  The first well drilled encountered a formation that flowed.  A large quantity of gas was found; however, much of that gas was not economically recoverable.  A second well was drilled two years later that found an economic gas reservoir that has produced for over three years.  Two subsequent wells have been drilled that did not find economic reserves.  In all but one case of these wells, the original seismic interpretation indicated the presence of gas reservoirs.

“From the neural network interpretation it was clear that the two dry holes were drilled in locations that were not in economic gas concentrations”, says Deborah Sacrey, Owner of Auburn Energy.  “Applying the Geophysical Insights neural network technology to some 13 attributes, we can now see that two of the four wells would not have been drilled, saving investors about $8MM.  I had included all of the AVO attribute analysis for the area of study available at the time.  The neural network attribute analysis went well beyond conventional analysis by assimilating many more attributes than conventional software tools.  We are now expanding the study area using the neural network technology to confirm additional exploratory prospects.”

As an indication of the effectiveness of the neural network technology, Figure 1 is seismic data from the existing gas field referenced above in Wharton County.  Figure 1 is comprised of seismic reflection data and fault interpretation using conventional, commercially available, seismic interpretation software.  Since two wells were dry holes, only two of the four wells drilled in the field are shown in Figure 1.   The conventional analysis in Figure 1 indicates both reservoirs, one of which could not be produced because of very fine formation particles flowing along with the gas.  The well on the left resulted in a gas ‘show’ only, while the well on the right has been producing for three years.   In Figure 2, the original data is replaced with a neural network analysis based on a combination of 13 seismic attributes, revealing two seismic anomalies located near the two wells shown in Figure 1. Figure 1 vs. 2 effectively compare conventional (“before”) and neural network (“after”) on the field of study.  Since the neural network analysis resulted in only two anomalies being indicated, it is likely that only two wells would have been drilled out of the four.  Also of interest is the position of the two wells near the edge of the two seismic anomalies, suggesting a potential “near miss” in the location of the wells.

Nature is full of examples of how animals, following a few simple rules, organize themselves into assemblages such as moving flocks, schools and herds.  Moreover, they re-organize themselves after a disruption to their normal pattern of movement.  Consider a flock of migratory geese and a school of fish.  After taking flight, the flock of geese quickly organizes into the familiar ‘V’ flying pattern.  A school of fish forms and moves about as a protection against predators.  In either the case of flying geese or school of fish, the assemblage quickly disperses at the threat of a predator and quickly re-assembles once the threat is past.  In both instances, the assemblage is robust yet each individual in the group is behaving according to a few simple instructions, i.e., ‘if not the leader, follow the individual ahead and remain to the left or right’.  The neurons in a neural network are presented with data and adapt to the data following a set of simple rules. The neural network becomes, in essence, a “learning machine” whereby the network adapts to the characteristics of the data resulting in what is called Self Organizing Maps (SOM’s).  The input data is unclassified and the learning process is unattended.  The SOM is a powerful cluster analysis and pattern recognition method developed by Professor Teuvo Kohonen of Finland during the 1970’s and 80’s.  In the case study shown above, we present results based on SOM on a 3D seismic survey consisting of a large number of seismic attributes.  These results constitute an ongoing portion of our research in this area.  Neural networks offer an automated process to assist seismic interpretation, for instance, accelerating prospect evaluation by…

Consider for a moment the quantity of data available from a single seismic survey and how neural networks may be applied to reveal insights in the seismic reflection data.   The main task facing a geoscientist is to identify and ascribe the geologic meaning to observable patterns in the data.  The most obvious patterns are found in seismic reflections, but in recent years the industry is using more subtle patterns and relating them to such features as porosity, lithology, and fluid content, as well as underground structure.  The isolation of such patterns and their use as possible identifiers of subsurface characteristics constitutes attribute analysis, which is a standard tool in the geoscientist’s toolkit.  Over the past several years, growth in seismic data volumes has multiplied many times in terms of geographic area covered, depth of interest, and the number of attributes.  Often, a prospect is evaluated with a primary 3D survey along with 5 to 25 attributes serving general and unique purposes.  A group of just five typical seismic reflection attributes is shown in Figure 3.

For illustration purposes, Figure 4 (left) depicts three attributes from a single 3D survey.  The three points near the center highlight one data sample for three associated attributes, aligned as parallel rectangular blocks.  Converting the three attributes into a SOM attribute perspective, as shown in Figure 4 (right), each point sample is plotted in attribute space along three attribute axes, resulting in a natural cluster of similar characteristics.  The natural clusters constitute regions of higher information density and may indicate seismic events or anomalies in the data.  Two additional natural clusters are illustrated in Figure 4 as well.  Initially, neurons are randomly placed by the algorithm in attribute space.  In the “learning” stage, neurons are attracted to the data samples in the clusters in a recursive process.  Ultimately after neuron movement has finished, the neurons reveal subtle combinations of attributes that may highlight the presence and type of hydrocarbons.  While the details of the algorithm are available in the technical literature, suffice to say that Figures 1 and 2 compare a conventional seismic data display, offering limited resolution, to a neural network classification of the same data. The neural network depiction dramatically increases the resolution and insight into the data.

Other Applications of Neural Networks

Fortunately, large sets of data can be evaluated by a neural network rapidly, typically in a matter of minutes to a few hours, making their iterative use quite practical.  They can also be programmed to run unattended and report by exception when anomalies are encountered.

Getting Started with Neural Network Technology

One of the keys to a successful project is selecting the best choice of seismic attributes, revealed by a thorough assessment of the data.  This step will require a deep knowledge of geophysics, of course, and is optimally conducted by domain experts.  As the neural network operates on the data, visual output from various attributes will require an interpretation of the attributes for the geologic trends of interest.  Where available, well information is then used for calibration purposes to bring the all-important ground truth to the seismic response.  The complete analysis will result in two new attribute volumes – a neural network classification and a classification reliability, which identifies uncertainty in the classification.

A major change is needed to take full advantage of the explosion of data in the oilfield.  Neural network technology enables greater insights into all types of data but has its greatest value when applied to seismic interpretation.  Neural networks are proving their value to reduce the time and costs for the interpretation process while increasing the dependability of the results. The technology can also be used to correlate well information with well log data and enhance the quality of reservoir simulation.  Neural networks have the promise of being a disruptive technology that will accelerate and improve the industry’s use of data from the field.

Serving exploration and production companies, Geophysical Insights provides specialized consulting and training in the methodology of neural networks and the appropriate choice of parameters for neural network classifications.  The company’s current work is in applying neural network technology to real problems and innovative applications.  Services are delivered through client collaboration and training.  An objective of each client engagement is to enable the client to obtain a practical understanding and use of methodologies and tools that can transform the interpretation process.